PLEASE NOTE: This article has been archived. It first appeared on ProRec.com in August 1998, contributed by then Contributing Editor Jay Kahrs. We will not be making any updates to the article. Please visit the home page for our latest content. Thank you!

I had a few people write to me and ask how I recorded my vocals. I record my vocals several different ways depending on the vocalist, style of music and my mood. But there are some basic things you can do to help improve the way your vocals sound.

Next month I’ll give you some specific tweaky tips.

1) Use your best mic! This is usually a no-brainier. A better mic will usually be more accurate than the $50 K-Mart special you got from aunt Edna last Christmas. Preferably, you’ll use a large diaphragm condenser mic like the Rode NT-2 or AT-4050. These capture more bass and warmth then a small diaphragm like a AKG C-1000 or the SM81. A condenser mic will pick up more detail then a dynamic mic like a SM57. That’s not to say that you can’t use a 57. There are some times when a condenser will pick up too much detail and I’ll pull out a dynamic.

2) Plug the mic into your best mic pre. A preamp is unique because it’s amplifying the signal from a tiny voltage to a large voltage. A mic level signal is around -60 to -50 dbv. A line signal by comparison is either -10 or +4 dbv. I’ve seen a lot of people that recorded their vocals by plugging their mic right into the 1/8″ jack on their soundcard. Bad idea. Use the mic pre in your external mixer, or you could always buy an external mic pre or channel like the Joe Meek VC3, Focusrite Green Channel strip or something else. These give you a high quality mic pre, compressor and some eq all in one box. The idea is to bypass the console for everything except playback which will give you a better sound. A different mic pre will also make the vocals stand out from the rest of the tracks without reaching for eq.

3) Try to keep things quiet. Use headphones when recording. I never put the singer in front a speakers unless I absolutely have to make them comfortable. If the leakage gets out of hand, then mixing becomes difficult. If you have to use speakers make sure that they’re facing away from the mic. Also, sealed headphones like the Sennheiser HD 25 SP (my personal favs, great sound, loud, nice fit around $125 each and worth every penny) will make less noise then open phones like the AKG K141. Those headphones that came with your Walkman aren’t much better than having speakers aimed at the mic, so try to get something half-way decent. You can pick up an ok set of headphones for vocals for around $30-40.

4) Use some compression. This can either be a $100 Boss pedal or a rack unit like the Behringer Composer. The rack units can generally take anything that is thrown at them from vocals to bass to drums while the pedals only like to see guitars or instruments with a similar frequency range. A compressor will even out the sound of the vocals and them more consistent. Sometimes you can also get them to sound punchier or fatter. A good place to start is a ratio between 2:1 or 5:1 with a quick attack, medium release and around 4-6db of gain reduction. You can experiment from there to see what fits your song best.

The most important rule is that there are no rules. The Beastie Boys get all those distorted vocals by using cheap mics. Your ears are the final judge of what sounds good and what sounds bad. 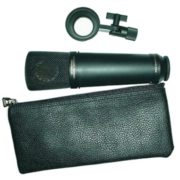