Whenever we do a recording, sometimes we get the optimum sound level. Other times we have to adjust the level to make it louder or quieter. Gain and amplifying features come in handy in making adjustments to how loud the audio should be. But these two do not have an identical effect on audio files. Primarily they increase the volume but there is more to how they change audio files.

In general, we have words or terms that are always used interchangeably but they do not mean the same thing.An example is pills and tablets.Pills and tablets just like gain and amplify, are usually used in the place of each other but they refer to two different things. This article will look at gain and amplification processes separately, the differences, and the cases where they apply.

What is Gain in Audacity?

To understand gain let us follow this example in Audacity. I have a short audio file imported. This is a voice-over recording.

From the red arrows, we can tell that the audio level can be adjusted to be a bit louder without worrying about getting to the distorted level. The room to make the adjustments shown by the arrows is quite favorable. Below is an image with a distorted audio file. This file will sound louder than the one in the previous image. The waveform peaks are very high by looking at the scale on the left.

The gain function in Audacity is capable of doing so. It adjusts the level of the audio making it perceptually louder or softer. In this case, the digital audio workspace modifies the audio making the audio loud or softer without fundamentally changing the data. Here is a side-to-side image of a file where there was some gain added.

The image on the right has the slider adjusted. The person listening will perceive it as louder but the audio waveform would have not changed.

Let us say I was recording in a park. A few minutes into the recording I captured birds chirping in the background. I want to make the birds sound louder. I will apply the gain. Whenever someone listens they will acknowledge the presence of birds in my recording. If my recording had other sounds that were louder than the birds and they were captured nicely their level will be raised as well. Some parts will experience distortion if I add a lot of gain.

Dragging towards the + sign increases the volume making it louder. Dragging it towards the – sign makes it softer.

Note that whenever you make these adjustments the audio waveform does not change but it gets louder or quieter regardless. You can confirm this by listening as you drag or by looking at the playback level meter before and after dragging the slider.

Also, make sure the audio is not distorted by dragging the slider to the furthest right by listening and checking the playback level meter. This is when the bars get a constant red color.

Lastly, all these changes can be saved either by exporting the audio or just saving the project. For instance, if I made a +4.0dB gain adjustment and close the project the next time I will open the file I will have this change in place.

Going with the park recording with birds chirping in the background example amplification will make the sounds louder and have the bird sounds feel closer and more emphasis paid to them. The other sounds that were closer to the microphone and were captured correctly will be raised as well but there will be a limit to how loud they get. Below is the process of amplifying audio in Audacity.

First, double-click on the waveform to select it all. Alternatively, you can select it all by using Ctrl + A (Windows) or Command + A (macOS). Without the selection, you will not be able to undertake the amplifying process.

Next click on Effect on the menu bar followed by the Amplify option from the dropdown list that will open.

When you click on Amplify this pop-up box will appear.

In the first box key in the amount of amplification that will be made on the file. Positive figures make the audio louder while the negative ones make the audio quieter. As you adjust the number in this entry the figure in New Peak Amplitude (dB) will change as well. The New Peak Amplitude is the maximum amount of amplification that can be applied to the audio being edited without the signal getting clipped.

Whenever you key in a figure higher than 0 in the New Peak Amplitude (dB) box and the Allow Clipping checkbox is not checked the command button OK will not be active for clicking. If it is checked it means that you can apply as much amplification that you want but the audio risks getting distorted. The Allow Clipping checkbox function is to prevent too much amplification from being applied to the audio.

Once you are done with the adjustments in this pop-up box click preview to ascertain that the audio sounds good. Click OK to apply.

From the description of both of the processes, the first obvious difference is in how they process data. Gain just has an adjustment of the sound levels while amplifying does that as well. The key difference is that amplifying has limits that come in handy in the process.

Amplify makes use of machine learning while gain will just use the input of the audio editor analysis. This is when it greys out the OK button whenever the New Peak Amplitude is set higher than 0.

Lastly, amplifying a file has an immediate change in the audio data. This change can be seen in the audio waveform. Before using the amplify effect on an audio file the audio will have a smaller waveform compared to its appearance once amplification is applied.

When adjusting gain the waveform does not change regardless of the audio sounding louder or quieter depending on the gain applied. This change will have an effect on the appearance of the waveform when you export the file.

Gain vs. Amplify Use Cases

Amplify is instrumental when there are disparities in the audio level signal. This is when some parts are loud and other parts are a bit low. This will help boost the low signals and not affect the louder ones to the point that they are distorted. An example can be a remote podcast recording that had two hosts and the sound level varies.

Gain on the other hand is used when you have a recording with a balanced level all through. When you are applying it you are either making the audio louder if the level was low or trying to minimize the level of a louder recording. This can be applied to instrumentals or even plain speech.

These two processes call for analysis before and as you are applying them. The analysis before will help in understanding what option should be used. This analysis will involve looking at the waveform and listening as well. The analysis when applied is beneficial in getting audio that sounds good at the end. As you drag the gain slider listen back to the recording simultaneously. The amplification process has a preview stage to assess the change.

Lastly, listening back after is verification that the changes made make the sound level better. 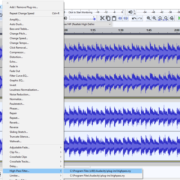 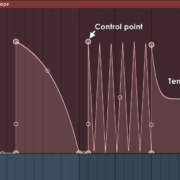 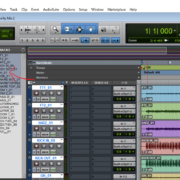 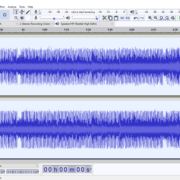