PLEASE NOTE: This article has been archived. It first appeared on ProRec.com in May 2002, contributed by then Editor-in-Chief Rip Rowan. We will not be making any updates to the article. Please visit the home page for our latest content. Thank you!

The Aardvark Direct Pro Q10 is a 10-input / 10-output 24 bit PCI combination preamp and soundcard for Windows and Mac. The system features 8 balanced audio inputs and outputs, MIDI I/O, and S/PDIF I/O on RCA jacks. Supported sample rates include 44.1KHz and 48KHz, and an upcoming driver update will give the soundcard 88.2 and 96 KHz capability. In addition, the Q10 ships with a free copy of Cakewalk Pro Audio v.9.

What’s in the Box

The system includes a small PCI card and a breakout box. Like other Aardvark products, power for the breakout box is provided by the PCI card, which means no power cord or wall wart – a nice feature. The PCI card is dominated by the large shielded cover which has a professional look and feel.

The breakout box utilizes eight combination XLR / 1/4″ Neutrik inputs on the front panel, and eight 1/4″ balanced outputs on the rear panel. The rear panel also features four insert points which allow you to insert a processor – say, a compressor – between the preamp and the A/D converter. I really liked this feature in a combination preamp / converter unit like the Q10.

The design of the Q10 is oriented around a “mixerless” design. The front panel includes two knobs to control the main output level (an additional pair on the rear panel) as well as a separate headphone jack on the front panel. This allows the user to connect the Q10 directly to the monitoring system and a pair of headphones and thus minimize the need for a mixing board.

All eight front inputs include mic preamps which allow you to plug mics directly into the breakout box without need for separate preamps or a mixer. Phantom power is provided on the first four inputs, allowing these to be used with condenser mics. I thought it a shame that phantom was not provided on all eight channels. In typical use, however, this should not prove to be a serious constraint for the home recordist. For example, the typical application for multi-input soundcards (recording a drum kit) will usually utilize two or three condenser mics (two overheads, and perhaps a hi-hat mic).

Channels 7 and 8 feature an optional E.F.R. (Enhanced Frequency Response) circuit designed to improve the sound of direct-recorded guitar and bass. The E.F.R. can be switched on or off independently for either channel. The feature set is minimalist yet useful – one or two direct inputs for direct guitars or bass, three or four condensers on drums, two or three dynamic mics on guitar amps, and a MIDI input for your keyboard. Or use a couple of inputs for direct keyboards. It’s really a useful feature set for the home recordist who struggles to record basic rhythm tracks for a three or four piece band.

Only a few controls are provided on the front panel. In particular I noticed right away that there were no trim knobs to set the preamp levels on the front panel. This is because Aardvark has packed a lot of functionality into one of the best-implemented control panels I’ve seen in a long time.

The control panel is laid out much like an analog mixer. At the top left are trim controls for the eight mic preamps. A level switch toggles between Line input (low gain), Mic 1 (moderate gain) and Mic 2 (high gain) levels. A trim control allows you to fine-tune the gain within the range provided by the level switch. Exact gain is displayed numerically beside the trim knob. This helps if you need to set several preamps to exactly the same gain.

Below the trim area is the metering section. Eight sets of meters display input level on a scale from -30 dBFS to 0 dBFS. Peak levels are also displayed numerically above the level meters. A peak hold button is provided to help you set the preamp gain.

At the bottom left are eight faders that control the monitor level and panning of the inputs. This monitor feed drives the master and headphone outputs. Moving to the right we find four pairs of software playback faders. This mixes the eight playback channels into the monitor mix. The overall layout makes it very simple to set up a monitoring mix that includes up to twenty channels – 10 audio input channels and 10 software output channels. I have seen few software control panels that were as intuitive and easy to use.

The upper right section of the control panel features two large analog-looking VU meters. I found these to be nothing but eye candy, but since they didn’t use a lot of CPU power, I didn’t mind them being there. Underneath the meters are selectors to modify the I/O routing using a useful “patchbay” interface, save and recall mixer presets (including the preamp trims) and an Advanced button where you can change the card’s I/O levels (-10 or +4) or tweak the ASIO driver settings. A “Phantom” light illuminates to remind you that you have the Phantom power turned on, and a brightness knob even controls the level of the illuminated red aardvark on the front panel of the breakout box.

Installation was totally painless. As with almost all gear I install, I started by going to Aardvark’s web site and downloading their latest installer. I was glad to find that it is a complete installer package – not a patch – which made installation a snap. I installed the PCI board, hooked up the breakout box, and booted up the computer. Windows detected the new device, I pointed it to the drivers I just downloaded, and it installed both the drivers and the control panel device automatically. After a reboot, I was ready to rock. Bulletproof.

To try out the preamps on the Q10 I used several fairly common mics and a couple of not-so-common ones: a Shure SM57, Audio-Technica 4050, Shure SM81, Groove Tubes MD1a, and Alesis AM40. As a basis for comparison I used my Mackie 1402 both because it is very familiar as well as the fact that its preamps are a kind of benchmark for this type of product.

I found the sound quality of the Aardvark preamps to be fairly comparable to the Mackie preamps. When set up for an equivalent amount of gain, the Aardvark exhibited just a few extra dB of noise, but both were able to provide ample preamplification. The Aardvark also tied the Mackie in the “key jangle” test with both preamps delivering a fairly accurate signal that just slightly distorted on the harshest key jangles. At maximum gain the Aardvark offerred about 15 dB more gain than the Mackie, however, at these extreme gain levels there was too much noise for my taste. However it is a rare case indeed where 60 dB of gain is not enough.

Other reviews have praised the Aardvark preamps as being “punchy”, “warm” and “smooth”. These superlatives are a little strong for this preamp. In particular, this preamp is more “accurate” than “warm” – which is a good thing if you’re going to be using this preamp on all your tracks. One or two warm tracks in a mix makes a warm mix. Twenty warm tracks makes warm mud.

One thing that I found lacking was a bass cut. All of my preamps offer some kind of cut switch – useful for taming rogue P-pops or tightening up a bass guitar. Of course this preamp doesn’t offer a phase switch either, a feature offered on some competing products. However, these are minor grievances that are overshadowed by the overall usefulness of the system.

The E.F.R. circuit was moderately useful. I am no fan of direct guitars, but if you are going to record direct, the E.F.R. circuit provided a smoother, rounder sound than the direct sound without the EQ. Where I found the E.F.R. to be most useful was in recording direct bass. Still, I’ll take a good Countryman direct box any day of the week for direct guitars and bass.

The Q10 offers good sounding converters, but I was a bit surprised that the noise floor showed up at about -90 dB. That isn’t horrible at all, but well above the level of audiophile-grade 24 bit converters which usually can reach as low as -110 to -120 dB. For example, I measure the noise floor of my MOTU 1224 / Mackie combo at -110 dB. Due to the design of the Q10, I had no real way of knowing if the noise was present in the converters, or being fed to them by the preamp. This was hardly a dealbreaker, though.

The Q10 includes Aardvark’s own “A|WDM” drivers for MME, WDM, ASIO, and GSIF support, making it compatible with all the popular PC audio software on the market including SAWStudio, Cakewalk, Cubase, Vegas, Soundforge, Wavelab, and Logic. Additionally the Q10 was a good performer when running ASIO-based softsynths like Reaktor, WDM softsynths like SONAR, and Gigasampler (GSIF). Running on my 1.4 GHz Athlon, I could reliably run at 9 ms latency with virtually no additional CPU overhead in Sonar, and could run stably at 3 ms latency with only a modest performance hit. This puts the Aardvark’s WDM implementation squarely on par with that of other well-implemented WDM and ASIO soundcards.

I have a few minor feature complaints. I do not like having the preamp trim controls in the software, or having to use the software meters to set the preamp gain. When it comes to setting levels, I am strictly a knobs-and-lights kind of guy. I would have liked to have phantom power on all eight inputs as well. I could have easily done without the E.F.R. circuit and the adjustable-brightness aardvark logo. And a bass cut switch on the preamps is a feature almost common enough to be considered a requirement.

However, let’s get the big picture. For a street price around $800 you get 8 analog inputs with 24 bit converters, a pair of digital I/Os, MIDI I/O, 8 good preamps, a monitor mixer, and some good audio recording software – everything you need to turn your PC into a powerful digital recorder for under a grand. That’s serious value. Most comparable systems using a soundcard and an external mixing board would cost twice as much or more. Additionally, the fact that the Q10 integrates all the common components (audio, MIDI, mic preamps, software) makes it a no-brainer for the person who wants to get started in computer recording.

For the home recordist or songwriter who is looking to step up from a stereo soundcard without breaking the bank, the Aardvark Q10 is a real value. It delivers quality sound and a strong feature set for the money, and is about as foolproof as they come. You could easily spend twice as much and not know what you got for your extra money. The Q10 delivers great results on a budget bill. Read more at http://www.aardvarkaudio.com. 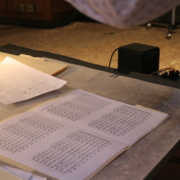