PLEASE NOTE: This article has been archived. It first appeared on ProRec.com in November 2009, contributed by then Product Review Editor Jim Roseberry. We will not be making any updates to the article. Please visit the home page for our latest content. Thank you!

A couple of months ago, I detailed Samplitude 2496 (from SEK’D). Since this DAW software supports 24Bit recording at Sample Rates up to 96kHz, and all major DAW software is soon to follow… it makes sense to also review the hardware side of a 24Bit 96kHz system. That brings us to this month’s review of the Prodif 96 and the SEK’D 2496s A/D D/A converters (AKA the little guy).

I say this in all honesty when I say that the Prodif 96 is absolutely the EASIEST audio card I’ve ever installed. No muss no fuss… just pop the card in, turn on your machine, load the drivers, restart your machine. The card is installed! The fact that this card requires no DMA channels or I/O address means that it is a breeze to install in just about any machine. All you need is a single IRQ. One other point worth mentioning is that the Prodif 96 is content to occupy IRQ 9 (some cards have a problem there).

When the Prodif 96’s drivers are installed, an icon is placed on your desktop. Double click on this icon and you will jump to the Device Manager (under Control Pannel). Now… click on the Prodif 96 entry (under Sound, Video and Game controllers). Click on the Settings tab… From here you can select the input source, determine the clock source for the output, select the output format, and verify that the card has locked to an external (input) source.

If for any reason there is a digital clocking problem (usually due to incorrect settings), the Prodif 96’s red LED will light up. If all is well and the Prodif 96 is locked to the input source, you should not see the red LED.

I’ve been using the Prodif 96 with Samplitude 2496, Cakewalk Pro Audio, and Cubase VST. As long as the input and clock settings are configured properly, the card works flawlessly.

On the digital side, there isn’t much subjective (sound wise) to talk about. Transfers via AES/EBU and S/PDIF (both optical and electrical) produced the expected results. What goes in… is what comes out…

Audio played back from the Prodif 96 appears at ALL of its outputs simultaneously! Thus, multiple devices can be fed audio simultaneously. This is a very flexible little card!

There aren’t too many parameters/settings, so using the 2496s is pretty simple.

Once things are wired up, all you need to do is set the input and output levels, select the desired Sample Rate (via a pair of buttons), and make sure your digital card is setup to accept digital input (via AES/EBU in this case).
If everything is OK, the Prodif 96’s red LED will NOT be lit. (If the Red LED is lit, you need to go back and check the input/clock settings.) Obviously SEK’D planned for the 2496s converters to be used with the Prodif 96…

I wish the 2496s offered a Sample Rate of 88.2kHz. Sample Rate conversion from 88.2kHz to 44.1kHz is a LOT simpler process than converting from 96kHz to 44.1kHz. However… don’t let this deter your interest. (see below)

The listening tests I conducted were not scientific, but rather a common studio monitoring environment… using Yamaha NS10s.

The 16Bit extraction test – To start things off, I extracted material off of 3 different CDs (Jazz, Rock, and Pop). I then proceeded to play the material thru the Prodif 96/2496s combination… and then thru a DAL Card D+ (a solid 16Bit audio card). The results were as I expected. Playback from the Card D+ sounded good, but playback from the 2496s sounded better. The audio was just a little more detailed, had more punch, and the soundstage was more 3-dimentional.

Please understand… This is not a knock in any way against the CardD+!! I would expect a $999.00 (list price) set of converters to sound better than the converters included on ANY audio card. That’s the law of economics.

Tracking at 24Bits 44.1kHz – I recently did a session tracking a solo performer playing acoustic guitar and singing. I has just gotten the 2496s converters, so I was itching to use them! My oh my what a WONDERFUL thing it was to track with 24Bits… No compression or limiting on the way in and the results sounded fantastic. The sound almost leapt from the speakers and nada single worry about digital overs. (Signal massive stadium applause!)

Next on the list was recording some acoustic drums… Ever struggled with trying to get a drum sound with BALLS (without digital overs) when recording to 16Bit digital? Again, the extra dynamic range when recording with 24Bits is a HUGE advantage! I was smacking the living hell out of my snare drum (mind you no compression/limiting on the way in) and the resultant sound had some MEAT… but not a single digital over. YAHOO!!!

Whats all the Hubbub about recording at 96kHz?

I wouldn’t have believed it myself if I hadn’t heard the results. Bottom line is that the highs sound more open and detailed. By the way… two other folks here in my studio could pick the 96kHz track EVERY time in a blind listening test (when compared with a 44.1kHz version). To hell with theory, my EARS tell me there is a difference.

This goes against everything that I have learned over the years… and goes against accepted practice. So I don’t make this statement lightly! You CAN hear a difference… anyone who tells you otherwise hasn’t tried recording at 96kHz! Period.

The Prodif 96 and 2496s converters that I used for this review are staying in my studio. I’m not selling them, and they sure aren’t goin’ back to SEK’D.

I want to qualify that when test recording at 96kHz, don’t record sample- playback units. They will have already rolled-off frequencies above 24kHz to prevent aliasing.

I suggest recording some real (not virtual) analog synth. (I used a Mini Moog for some of my tests.) Sawtooth waves with the filter wide-open will work nicely. Also try recording vocals, acoustic guitar, and acoustic drums. 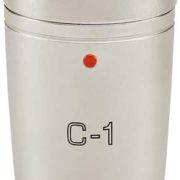